Interested in a chic, statement nail look? Coffin nails could be exactly what you need in your life. Before we dive into the nitty-gritty of coffin nails, we know you might be wondering “what are coffin nails?” So glad you asked! Coffin nails are a long nail shape that’s rounded, or curved, just until you get to the tip of the nail where it is squared off. Coffin shaped Acrylic nails have grown massively in popularity because of it’s unique, modern aesthetic. If you’re looking for something totally different you will want to check out some of the 30 + best coffin acrylic nails to try this year.

This army green color is a fun take on a neutral. Even though it is a green hue, because it isn’t a bold green it acts more like a neutral. The subtle metallic finish added to one of the nails gives these coffin acrylics a glam touch.

Marble nail designs are everywhere this year, and we’re definitely not mad at it. It’s such a chic style on nails and because it doesn’t have to be perfect to get the look it’s easy to DIY. The matte black on all of the complimentary nails gives the marble an edge.

We’re all about a matte black coffin acrylic nail. It’s simple but loaded with style. If you don’t want to go with ALL matte black on your coffin nails break it up with one or two nails in a nude tone, to tie the colors in together splatter some black onto the nude.

We are convinced black and white will forever be chic, especially on nails. Give the classic color combo an update with a matte finish and by adding simple designs to each nail. Play around with different stripes and rhinestones for a whole different look.

You can expect to see a lot of grey acrylic nails in 2019. These grey coffin acrylic nails feel spring/summer appropriate with the lighter grey hue mixed in with chrome and glitter. Combining the neutral vibe of grey with glam is the perfect combination if you ask us!

Didn’t we say marble nails were a thing? The good news is you can adapt the trend with different colors to switch things up to accommodate your personal style. We’re in love with the white and turquoise marble nails here. So chic!

Nothing says spring quite like pastel hues. Add two nail trends together for a totally fresh coffin nail look like this manicure. Pastels + monochrome = springtime perfection. Stick to cool pastel tones like blue and green to get the monochrome feel.

Coffin acrylic nails are long, obviously, but you don’t have to have a bold color on the entire nail for a stylish look. This design is a fun take on the classic French manicure we all know and love. Adding cobalt blue to just the tips is so cute! We love that they created a triangle shape on the tips to really emphasize the shape of the coffin nails.

Our jaws dropped when we found these coffin acrylic nails. Ombre acrylic nails are always stylish but this is a whole different take on the design. Adding peach to just the ends of the nails and fading in a nude tone gives this mani such a modern vibe.

Whether you’re a candy kinda gal or not these nails are perfection. Paint each nail a different color for a candy coated type of nail look. To get the best look choose colors that are all the same tone for a cohesive aesthetic.

Racer girls unite! Add some racing edge to your nails by painting the checkered flag design on one nail. Since that is a bold design you can just add it to one nail and paint the rest a complimentary color, like this
bright yellow.

When you opt for a color like cobalt blue you don’t need to add anything else to coffin acrylic nails. The color is amazing on its own. We love the matte finish on this manicure for a bit of an edge.

Florals for spring? We know, groundbreaking. This floral design got a major update with an edgy twist. Don’t get it twisted, florals are just as pretty in darker tones.

We don’t know about you, but we’re pretty certain we will never get tired of pink nails. With neon being such a big trend this year try a HOT pink on your coffin acrylic nails. Break up the pink with an ombre effect.

Iridescent nails are mesmerizing. Aren’t they? The multi color finish of an iridescent nail polish gives you a little bit of everything. Try adding it to just one of your coffin acrylic nails to let the finish really pop next to white.

White nails are one of our favorite color schemes for the warm weather months. Most of us end up using dark nail polish colors throughout the winter so it’s a fresh change. Add some white glitter to your nails for a monochromatic look with a glam touch.

Burgundy and wine tones are going to be a huge nail trend come fall/winter 2019. Get a head start on the trend with a matte finish added to your coffin acrylic nails. The color is so beautiful. Proof wine isn’t just great with dinner.

Nude and other neutral hues are a great go-to when you’re trying out coffin acrylics for the first time, or when you just want something that’s subdued. It’s stylish and looks great no matter what you wear. If you’ve been on the neutral nail color train and just want a different look, try matte!

Ok, how insane is this nail color? We’re officially obsessed. Metallic nails always look great but this year why not try a BLUE metallic. You’re still getting the glam factor metallic hues offer but in a bright color.

30Fit for a Royal Purple Acrylics

Feeling inspired? We sure are! It’s no wonder why Acrylic coffin nails have become such a big trend in 2019. One of the easiest ways to give your nails a whole new vibe is to change the shape and length. Most of us have all stuck to the basic nail lengths and shapes for most of our lives at this point. It’s a new season and the perfect time to switch things up. Not to mention, coffin acrylic nails give your hands and fingers a slimmed effect. Because of the elongated shape of the nails it gives your fingers a similar illusion. Pretty cool, right?

The good news is even though coffin acrylic nails are more of a bold shape, you can keep the color and nail art aspect of your manicure simple if you need to keep it professional for work. Of course, you can still go all out with rhinestones and other detailed nail designs. It’s really all up to you, your personal style and what works for your lifestyle.

We love some of the bright and light color tones that are popular for spring/summer this year, such as white, pink, nude and grey acrylic nails. The solid colors look beautiful on coffin acrylic nails. One of our favorite coffin nails is the sky blue color with rhinestones added to one of the nails. It’s such a pretty color for the warm weather months and the rhinestones add just enough glam without feeling like it’s a little too much. As far as a bolder coffin acrylic nail we’re in awe over the hot pink ombre look we stumbled across. Neon is EVERYTHING this year, even with your nails and really you can’t ever go wrong with pink nails. The ombre effect really emphasizes the coffin nail shape for even more of a pop. 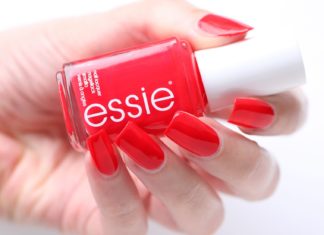 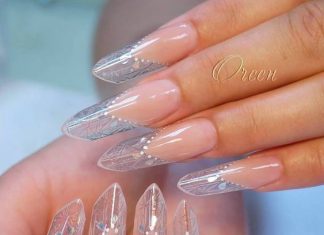 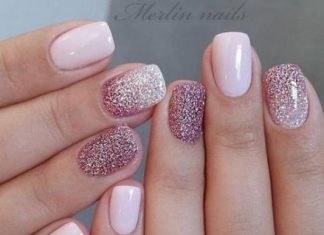