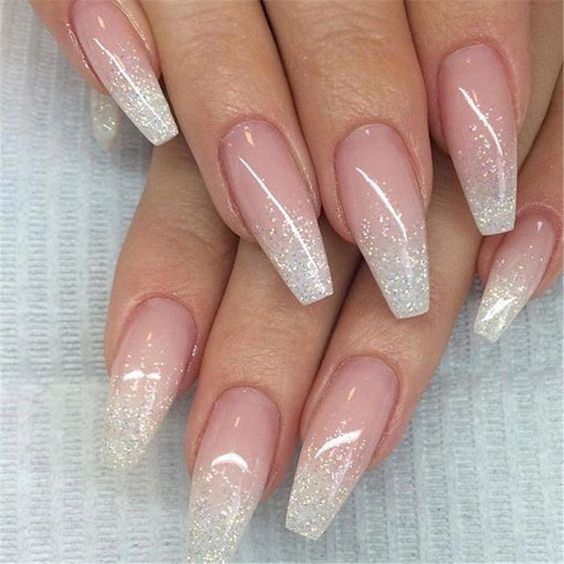 Oh ombre, how we love thee! Seriously though, ombre has been one of those nail trends that keeps trending year after year. It’s really no shock because ombre can be interpreted in so many ways and it instantly makes a nail design look much more detailed. One of the most common ways we’ve been seeing people utilize the ombre effect on nails is with a French ombre look. We think of this as a combination between a French manicure and ombre – giving you the best of both worlds. Not sure what we mean? Scroll through to see how you can apply the French ombre nail design to your nails.

This is such a unique take on French ombre nails. Combining the traditional French manicure design and applying ombre to the base of the nail. Using black and pink is a great color contrast to further highlight the designs.

This is an exaggerated interpretation of French ombre nails, using the classic French manicure colors. Bringing the white color at the ends down a bit further elongates the visual of the nails – this is a great design to rock if you have shorter nails and want them to look a bit longer.

The classic French manicure with an ombre take. Using the traditional colors feels anything BUT traditional with ombre. If you like nails with a bit more subtly this is the perfect French ombre nail for you to give a try.

Classic French ombre colors get a glamorous addition with rhinestones and a 3D flower. The look is kept on the neutral side with a white flower and clear rhinestones. You get a kind of monochromatic vibe, but with a lot more glam.

This take on French ombre is VERY subtle, you have to look a bit closely to really see the French ombre aspect of the design but that’s what makes this nail art so special. At first glance the nails look like a clear white polish and get a pretty pop with white glitter on an accent nail.

Add more design to classic French ombre nails by mixing in a couple of nails with marble design nails. The reason this works so well is because the marble nails are in a similar color scheme to the French ombre nails. It gives the whole look the right amount of cohesiveness.

How pretty are these nails?! You get the look of a classic French manicure, but with the ombre addition to the design that’s so pretty. To give the sophisticated nail look texture, glamour and an unexpected touch – add embellishment!

French ombre nails are turned into a modern design with silver glitter polish used at the tips of the nails. Adding even more style, the straight black light across the nail is an interested addition that we really love. Make every nail consistent with the design or add color, as they’ve done on these nails.

Give French ombre an edgy sheen with gold chrome. We thought this was such a gorgeous take on the trend. Chrome gives the look of texture to nails, which is what gives these an edgier type of vibe.

Create a monochromatic, yet very glamorous, nail design using French ombre as a design to break up rhinestones and glitter. Opting for gold glitter is the perfect complement to the neutral colors in French ombre that offers a monochromatic aesthetic.

Simple, sophisticated and stunning! This is another gorgeous example of how you can add a small detail to subtle white French ombre nails to achieve an elevated design. Applying a gold stripe down the center of one nail is all you need for something this pretty.

French ombre nails get a fully transformed look here. At first glance it looks like a classic French ombre design but when you look closer, you will notice the shape of the nails are different. Such a unique twist to really change up the look of French ombre.

Give French ombre an iridescent touch with this design. Using holographic nail polish at the ends of nails like this is a way to use the polish in a way where it feels a bit toned down. Iridescent polish can feel a bit over-the-top so if you want it toned down this is a great way to go.

Hot pink gets an updated feel when it’s used to achieve a French ombre look. Even though you’re only using a solid pink color here because it’s such a bright pink hue it adds this gorgeous pop that makes the design feel much more detailed than it is.

16Say it with Love

For the ladies who like the classic colors of a French manicure but want to personalize the design a bit more – this design is for you. Elevate the French ombre look by adding a matte finish to them. To take the design a bit further add a word, saying or phrase onto an accent nail using white polish to keep the color consistent.

This is another great example of how you can keep the classic color scheme but make it a bit different and unique. We adore the way they played with texture here by making the accent nail matte and painting a pretty floral design using the white/nude color palette.

We absolutely adore these French ombre nails. It’s so simple and minimal in design, but it’s SO stunning. The combination of the super matte finish and strategically placed rhinestones on two of the nails completely changes the feel of French ombre.

Give your French ombre nails a colorful addition by applying multi-color glitter to the base portion of a couple of the nails. Personally, we appreciate the fact that they only applied glitter to every other nail so you have the highlighted ombre effect.

Baby blue polish is so soft and pretty used this way. The color is light enough to not provide a major color pop, but offers enough color to still see some contrast next to the nude color at the base of the nail. Perfect for the spring!

It’s all about the accent nail! Can you tell one of the go-to ways to customize your French ombre nails is by adding the pop on one nail. Here they went full glam with rose gold glitter polish topped off with silver rhinestones.

Let’s face it, you can really use any nail color to transform the feel of a French ombre nail look. We love the use of a pale purple color here for a different color pop, but we have to say we’re really feeling the touch of glitter applied to a couple of the nails as well.

Ok, how fun are these French ombre nails?! If you can choose just one color to use at the ends of your nails, you can go with a handful of different colors. This gives you a rainbow look that’s got a neutral twist because the colors are only at the tips of the nails.

This French ombre nail design is great for the fall and winter seasons when you want something a little darker on your nails. Black is a go-to color for many of us this time of year, adding dark red with black gives a touch of color that still feels appropriate for the season.

Whether you need manicure inspiration for Valentine’s Day or you just want a bright pop of red – we adore this French ombre nail look. Using bright right at the tips and fading into a very pale pink is such a great use of color for this design.

We’re all about the ways people have implemented the traditional French manicure color scheme, but updated it using an ombre effect and including some small details. These nails are a great example of a very small touch of glam transforming the classic manicure.

We have to say we’re all about how some people are mixing in different nail shapes to transition the feel of a manicure. Since the accent nail is so popular we thought this was such a unique way to add even more uniqueness to that trend.

Love glitter, but want something that’s more subtle than an over the top glitter design? Rose gold glitter is such a gorgeous addition to nude nails to achieve a French ombre effect. Using rose gold feels a touch more neutral than a silver or copper glitter.

Aren’t these nails pretty? The ombre effect on these nails is quite subtle, while there it isn’t as bold as some of the other interpretations of the effect. Applying dainty rhinestones to the base of each nail gives the neutral nail just enough glam.

Staying in line with the classic French manicure colors these ombre nails get a twist by playing with the finish of the nails. The added sheen applied to the top of the French ombre gives it a whole different vibe. This would look great for any nail length and shape.

Using glitters at the tips of nails is always going to be a winning decision for French ombre nails. We love the way they mixed two different colors of glitter polish for added dimension. Here they kept it neutral with silver and black but you can rock any of your favorite colors.

Chrome and metallic polishes are having a major moment right now. Have fun with that trend by turning them into a French ombre nail design. Black ends add the perfect amount of contrast to silver chrome polish here.

This is such a pretty, small adjustment to the typical French manicure colors. Instead of using a solid white nail polish, swapping it out for white glitter at the ends is the small change we didn’t know could make such a big difference on the nails.

How fun is this winter inspired French ombre nail look?! Painting a neutral colored snowflake onto each nail gives that snowy vibe. It’s winter inspired but not in a childlike way – this is the grown up way to rock a winter manicure.

We’re not done with the accent nail designs! Another gorgeous example of how even with a minimal design element applied to the accent nail can give French ombre a new look. Applying metallic embellishments keeps this neutral but adds shine and texture.